Labour Youth Honours the Work of the INMO

The Irish Nurses and Midwives Organisation (INMO) are on the front line of trying to make our health services work in impossible circumstances. This weekend Labour Youth awarded the INMO the Jim Kemmy Thirst for Justice Award in recognition of their determination to create a truly fair and universal healthcare system.

The General Secretary of the INMO, Phil Ní Sheaghdha, was welcomed to Galway by Labour Youth to receive the Award on behalf of the INMO, which was presented by the leader of the Labour Party, Brendan Howlin TD.

Speaking at the event, Brendan said:

57 Labour candidates have been elected to serve as local Councillors, in 21 of Ireland's 31 local councils.

Labour's vote share was 9.8% in those areas we contested. Of those elected, 34 were sitting Councillors, 10 had run in the past and 13 were first-time candidates.

Labour had fewer TDs and Senators, and fewer party resources than in 2014. Yet, we increased the Party’s number of elected Councillors, with seat gains in Waterford (+3), Fingal (+2), Wicklow (+2), Cork City (+1), Louth (+1) and Meath (+1). Crucially, we secured a solid vote in a number of areas where we’d hope to win Dáil seats.

Labour fielded 111 candidates in 95 local electoral areas. 41% of our candidates were women, and 42% of our elected Councillors are women.

Co-living Proposals Show Fine Gael is Out of Touch

Minister Murphy recently said that professional people should live like students in so-called co-living accommodation, because that is now normal in London or New York. I would point out to the Minister that those are among the most unaffordable housing markets in the world, where prices and rents are out of control.

London and New York have serious problems because housing is now an investment for speculation. Speculative investment in housing is clearly happening in Ireland too.

The most recent OECD report warns that the Irish economy is vulnerable to recession due to a disorderly Brexit. But it also warns that the presence of foreign investors in the property market is a particular risk.

We Should Embrace a New, Inclusive Definition of Irishness

Across Europe, populists and extremists are trying to resurrect failed ideas about segregating people by language, religion or the colour of their skin. It is not enough to dismiss these ideas; we have to actively oppose them to ensure social inclusion in Ireland’s diverse society.

We should rightly celebrate our age-old traditions, and migrants should be taught Irish history, culture and language in our schools. But at the same time, we should welcome new cultural contributions from our diverse population, and not supress difference.

Why we want to restore Town Councils

Brendan Howlin writes below about why the Labour Party wants to restore town councils so that people can have a real democratic say in the future of their local town.

On Thursday 28th March, the Dáil select committee on local government will scrutinise the bill from Brendan Howlin TD that seeks to restore Town Councils.

Towns are at the heart of our community and drive local economies across Ireland. It’s where people meet, do their shopping, go to school, watch a match, and celebrate life’s big moments.

When a local person does something great, or when a big celebrity visits, it’s where we gather to mark those events. 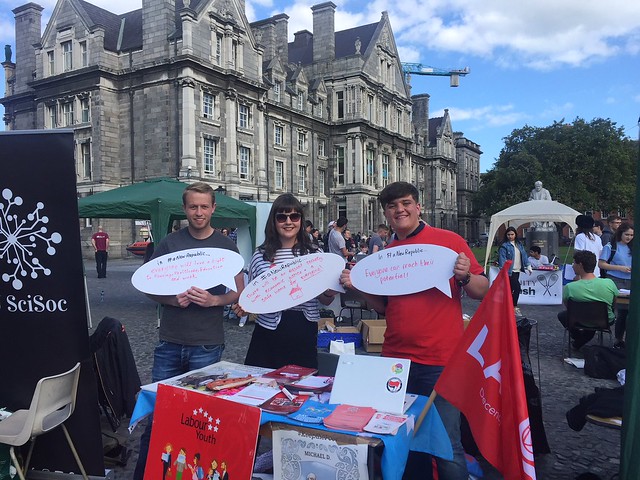 Time to separate Church and State in Education

Originally published on the Journal.ie, Senator Aodhán Ó Ríordáin writes asking, if the constitution is the problem, then the models previously used such as the Citizens' Assembly should be utilised to address how we end religious control of education in Ireland

You can take action here by signing our petition calling for the Citizens' Assembly to be reconvened.

After the resounding success of the ‘Repeal the 8th’ campaign, the question is already being asked: what next?

Housing, education, poverty and health are constant struggles for Irish political life to get to grips with. For me the cause of overhauling our drug policy is central to how we show compassion and end stigma for some of our most vulnerable citizens.

In addition to his involvement in the Dublin Labour Party, Richard O’Carroll was an official of the Brick and Stonelayers Trade Union. During the Rising, Richard was shot by a British officer on Camden Street on the 26th of April 1916. Despite being rescued by a passing bread van and brought to hospital, Richard died nine days later in Portobello Military Hospital, leaving behind his widow, Annie, and seven children.

Have your say on #aNewRepublic

The Labour Party’s current project ‘A New Republic’ invites people across Ireland to take a step back and look at the big picture of where we as a society want to be in 100 years’ time, and what changes we need to make to get there.