Young Families and Older People Better off in #Budget16

An Tánaiste Joan Burton and Deputy Brendan Ryan TD made a visit together to Little Apples Crèche and Montessori in Swords where they discussed the benefits that will come from investment in childcare in Budget16. We are reforming the quality of care and supports available to parents and their children. In Budget 2016 we are increasing child benefit, introducing more paternity leave, providing an effective second year of pre-school, and extending the rollout of free GP care to children aged 6-11.

The Tánaiste and Minister for Social Protection, Joan Burton T.D., has published the Social Welfare Bill 2015 following approval by Government.

Budget 2016 is about making life easier for people. A critical role of the budget is to help jobseekers back into work and to invest in welfare improvements. The Social Welfare Bill 2015 provides in a responsible way, targeted increases for pensioners, families and vulnerable groups.

Some of the measures of the Social Welfare Bill include:

- An increase of €3 in the weekly pension for pensioners and carers aged 66 years and over;

Today the Marriage Bill passed through the Seanad. The Marriage Bill has given legal recognition for gay and lesbian couples to get married. Following on from the historic Marriage Equality Referendum in May, Labour TDs, Senators and members gathered in Leinster House today to watch the Bill being passed.

Speaking after the Bill passed in the Seanad Deputy John Lyons TD said: “The realisation of marriage equality in Ireland will have a positive impact on the lives of so many lesbian and gay couples who have been waiting for the right to be able to say 'I do' in front of their friends and in front of their families.

Are You Better Off in #Budget16?

[Try the Budget calculator to find out how Budget 2016 affects you.]

The calculator helps people quickly access how various tax cuts and child benefit increases will positively affect the money in their pockets and can be found on our Budget 2016 website here.

The recovery is starting to reach the kitchen table. Families have a little bit more at the end of every month. This Budget continues that, but does nothing to risk that recovery. This Budget is also about delivering on opportunity. It shows what Labour in Government is delivering, and what we can deliver if returned to Government.

Budget 2016 is about making life better for our people

Through perseverance Labour in government has restored the health of our public finances. It will not risk the hard earned gains of that recovery. 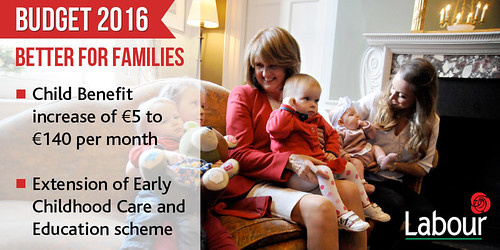 This government will, however, continue the process of significantly raising living standards and investing in essential services. It will also deliver for vulnerable groups. Only a strong economy can deliver a decent society and only a government with Labour at its core can deliver both.

This budget will mean better living standards and fairer taxes. We will reduce contributions from all low and middle workers on all income earned under €70,000 and we will increase the minimum wage. We will increase vital supports including the pension and respite care grant and will provide an increased Christmas Bonus.

Over the next while we'll be posting lots of information about today's Budget. In the meantime you can watch Minister Howlin's full Budget speech from the link and we've also prepared a comprehensive document containing everything you need to know about #Budget16 which you can download from here.

Labour Women have launched their Let’s Talk About Childcare Report which was commissioned by An Tánaiste and Labour Party Leader Joan Burton to explore issues surrounding childcare in Ireland and to make recommendations that will feed into Labour’s General Election manifesto.

The report was presented to the Party Leader by Deputy Joanna Tuffy, Deputy Ciara Conway, Deputy Arthur Spring and Deputy Michael McCarthy along with representatives of Labour Women.

The working group was established in July 2015 to look at at progressive ways to improve childcare in Ireland. An online campaign was carried out using videos, online and offline questionnaires as well as public meetings.

Minister Jan O’Sullivan (Minister for Education and Skills) has today launched the Digital Strategy for Schools 2015-2020. Speaking at the launch at the Mercy Secondary School, Inchicore, Dublin 8, Minister O’Sullivan said: “Giving our students the opportunity to develop 21st century skills is a priority. Technology is embedded in all aspects of our lives, and is bringing our society new advantages and solutions every day. “This five year strategy will achieve our goal of allowing all students to develop 21st century skills.

Earlier this week Minister Brendan Howlin and the Tánaiste Joan Burton revealed details of the Capital Plan, 'Building the Recovery' -  a large scale investment programme that will increase the State’s infrastructure, support economic recovery and jobs, support sustainable communities throughout Ireland and provide modern, fit for purpose buildings to deliver services to our citizens.

In the video Minister Howlin talks about the capital plan and how it will make Ireland's infrastructure fit for the 21st century.

You can find out more about the Capital Plan in a previous post we published on Tuesday and you can download 'Building the Recovery' the capital plan from here.