Deputy Joanna Tuffy writes in today's Irish Times about Labour's record on equality in reponse to a recently published report by TASC.

The recent report of the think tank Tasc on economic inequality in Ireland has generated a good deal of response, not least an editorial in this newspaper. The impression has been given that economic inequality in Ireland is more grievous than in any other developed country; that the current Government is indifferent to inequality and that inequality is, in the words of the Irish Times editorial writer, a result of “the political choices we have made”. These assertions are factually misleading and politically repugnant.

Last night Labour Party members in Carlow/Kilkenny selected Cllr Willie Quinn as the Labour Party candidate in the forthcoming byelection. Cllr Quinn who has been a county councillor since 2007 said the byelection is about protecting the economic recovery and helping to build a better financial future for the peple of Carlow/Kilkenny "with a sustainable model, away from the ‘wrecking ball’ politicians and those who are only interested in mayhem and chaos".

Last night's convention which was chaired by Deputy Emmet Stagg and attended by the Tánaiste Joan Burton, heard of the rich tradition of Labour in the constituency.

Labour Youth launched its ‘Yes to Marriage Equality’ campaign this afternoon with a marriage-themed photoshoot outside Leinster House. Youth members performed mock marriages alongside Minister Alex White and John Lyons TD, in their roles as Campaign Director for the referendum and Co-chair of Labour LGBT respectively, as well as Minister of State for Equality Aodhán Ó Ríordáin.

Young people have the potential to carry this referendum to a successful outcome. We have the passion and the will to see it through - but we must not be complacent. There are still many people

Last night Labour LGBT held an event to mark the start of the marriage equality referendum campaign attended by party members and supporters from all over the country. The Tánaiste Joan Burton addressed the crowd on the night as did the party's Director of Elections for the campaign Minister Alex White.

The Tánaiste said: "[Marriage Equality] is an issue I know we care deeply about, as people who believe in the principles of equality. First we must make our case. Hard work lies ahead between now and May.

Significant progress on getting people back to work has been made by the Government, the Tánaiste Joan Burton said today speaking at the launch of the Regional Economic Strategy.

The priority of the Government is to get people back to work, replacing the 330,000 jobs lost in the crisis. The Tánaiste Joan Burton today said that while progress has been made ‘it would be wrong to suggest that all regions have benefited equally’.

“I’ve spoken extensively of the need for the economic recovery to be accompanied by a social recovery. That means that every community feels the benefit of economic growth,” she said.

Yesterday's 'Sunday with Miriam' on RTE Radio 1 saw a panel comprising the Tánaiste Joan Burton, Deputy Anne Ferris and Senator Averil Power, where they talked about their personal experiences of adoption and the impact it has had on their lives. You can hear their stories from 12 minutes in. 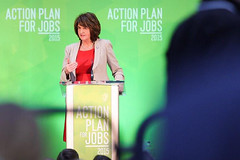 The Tánaiste Joan Burton at the Action Plan for Jobs launch

The 2015 Action Plan for Jobs was launched today which will see nearly 400 actions to be taken by 16 Government Departments and more than 60 State Agencies during 2015 to support job-creation.

Speaking at the launch the Tánaiste Joan Burton said: “We are making significant progress in getting people back to work but we went to increase the momentum. So we are introducing further schemes to assist jobseekers return to employment, including the Back to Work Family Dividend.

This afternoon Daragh Lynch (aged 3) was on hand to help the Tánaiste Joan Burton and Minister Brendan Howlin launch our Budget 2015 tax calculator on our dedicated Budget 2015 website.

[Calculate how Budget 2015 affects you from our Budget website here.]

The calculator helps people quickly access how various tax cuts and child benefit increases will positively affect the money in their pockets  and can be found on our Budget 2015 website here.

Following today’s Jobs Cabinet which focused on a range of economic and job creation strategies, the Tánaiste Joan Burton said the progress the Government is making on the economic and employment front is ‘clear to see’ from the 1000s returning to work each month. However the Tánaiste said economic growth and new jobs are not enough.

“We also have to ensure that workers get sufficient hours and a fair wage, which is why we are establishing the Low Pay Commission to examine the minimum wage and why we will also investigate the prevalence of zero-hour contracts and take action where required,” the Tánaiste said. Among the measures agreed for economic and job creation strategies include:

Minister Alex White leaving 17 roses at Charlie Hebdo on behalf of the Irish people, for the victims and in solidarity with France.

Yesterday the Minister for Communications Alex White TD was in Paris where he visited the Charlie Hebdo offices leaving 17 white roses in memory of those who were killed in last week’s terrorist attacks.

Accompanying the flowers was a message which read: “On behalf of the Government and the people of Ireland, in memory of all the victims of the horrific attacks, and in solidarity with the people of France in defence of the values of tolerance and freedom of expression”.