Pat celebrating his 58th Birthday by blowing out the candles on his birthday cake with help from pre-school children, Hannah Brennan-Doyne and Ellie Manning during his visit to Mary Mother of Hope National School, Littlepace, Clonee.

Today marked the birthday of an important member of our team; the Party Leader, Pat who celebrated the day while canvassing with Joan Burton and Joanna Tuffy.

On hand to help him blow out his candles were Hannah Brennan-Doyne and Ellie Manning during a visit to Mary Mother of Hope National School in Littlepace. Not only was it Pat's birthday and therefore cake all round for everyone but we also launched a major document on education .

The Best Education for Our Children tackles a wide range of issues under a number of different headings including funding, equity, curriculum reform, buildings, special needs, pre-school and school leaderships. Contained in our proposal is what we will do for class sizes, early school leavers, tackling disadvantage and literacy. The full document is available in a PDF format here and you can read Pat's statement here.

Back in election HQ our Director of Elections, James Wrynn and Environment spokesperson Eamon Gilmore held a media briefing on the progress of our election campaign from both an organisational and political perspective.

Speaking to journalists James said: "Most constituencies have completed a full round of canvassing and they will now be returning to key areas in the days between now and Thursday to try and copper fasten our support. 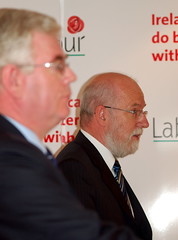 Eamon and James at the press briefing

"New posters are going up in most areas over the weekend and this time we are taking particular steps to ensure the highest turnout of voters.... We are greatly encouraged by the reception [Pat] is getting around the country. Every constituency wants him because of the warmth of the reception he gets. I have no doubt that his popularity, his strength and his authority will reap a big reward for Labour candidates on polling day."

Eamon said: "We are now less than a week away from the election, entering the final weekend before polling day, the period when many undecided voters settle on their voting intentions.

"Almost three weeks into one of the longest election campaigns of recent decades, I am more convinced than ever that we are heading for a change of government and that Labour is poised to pick up a significant number of additional seats."