One of the new faces on our PLP, Deputy Sean Sherlock who retained the Labour seat in Cork East previously held by his father.

Sean Sherlock, the newly elected TD for Cork East, is the youngest Labour TD having retained the seat held by his father in Cork East.

While other young people might rebel against their parents, Sean found himself heavily influenced by the politics that surrounded him growing up.

"In the normal run of things a teenager would rebel against their parents and buck the trend but I have always been political. My political consciousness was awoken by the Anti-Apartheid Movement and Amnesty International as well as through the music of Billy Bragg, Woody Guthrie, Christy Moore, Bob Dylan and Bruce Springsteen."

The fact that one of Sean's earliest memories involves his father's clinics being held in the family home also cements Sean's love of politics.

"My family and I would be sharing the living room, watching the telly, with about 10 or 12 people, I'd also be answering the phone and taking messages. That has to have an effect in shaping your consciousness."

Sean went on to study politics in UCG before going into corporate banking upon graduation. 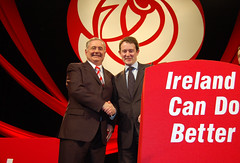 Pat and Sean at the Labour Party conference

"A career in banking wasn't for me. Luckily an opportunity to do an internship in the European Parliament though Prionsias DeRossa MEP came up I and stayed there for three years. I will always be grateful to Proinsias for that opportunity."

"In 2002 I acted as my Dad's parliamentary assistant and when the dual mandate ended I was faced with a crossroads decision of whether I would stay in the background or put myself forward for co-option onto Cork County Council and Mallow Town Council. I was subsequently re-elected in the local elections in 2004.

"At that stage the dye was firmly cast - while I had initial doubts about my ability to be able to fill the shoes of a man who had given over 35 years to public life I found myself relishing the task." 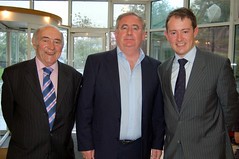 "I felt there was an opportunity for me to run for the Dail. I pursued that and worked hard for three years. This culminated in the retention of the Sherlock Labour seat.

"At no stage was the seat a given, my Dad's reputation was one of fierce hard work and I carry a certain amount of that. People trust you on the basis of your father's reputation but you have to prove yourself equal of the task.

"I feel I have been given the opportunity as a Dail Deputy but it is important for me to carve out my own niche. The Irish electorate will only give you one chance to prove yourself."

Throughout Sean's Dail campaign there were a number of key issues hitting his constituency hard, the downgrading of Dairygold as well as the loss of jobs in Irish Sugar. 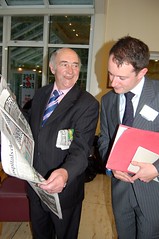 "The loss of these industrial jobs, the ripping out of our industrial food producing heartland is very hard to take."

In 2004 Sean was elected Mayor of Mallow, a year which proved to be an invaluable learning experience giving Sean a powerful insight into the voluntary and community activities that happen in Mallow.

"It made me appreciate the fact that despite recent comments on how we have become a far more individualised society, the sense of community in this country is still as strong as ever. There are major infrastructural and funding deficits that prevent a lot happening."

His role in the Dail means that Sean now leaves the council behind him.

He said: "I am already experiencing the severe loss from my two council seats. I absolutely relished the cut and thrust of local authority politics and all the issues therein. The irony is that while dual mandate allowed me an entry into politics, I sometimes wish the facility would be retained.

"The reality is that we must drive on - I'll continue to play an active role in the bread and butter issues relating to council matters that affect people directly." 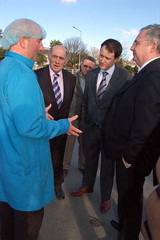 Given that Sean is the youngest member of the PLP, he feels passionately about rights for older people.

"Our older people are becoming more and more marginalised and I believe the services were once commonplace for older people are increasingly more difficult to attain, things like step-down beds, community nursing home beds, access to home-helps and carers allowance.

"In a society where people are now living longer it is vitally important that we devise strategies for ensuring our older people are looked after in their autumn of their lives."

Another area that Sean is keen to work on concerns employment in Cork East.

"My constituency has seen the gradual erosion of it's industrial base in once a 'bread basket' region producing sugar, Cadbury's chocolate and Galtee foods. These are all but lost and the challenge within my region will be to replace those jobs."

"The focus should not be solely on foreign direct investment but on ensuring we can grow our small to medium enterprises by encouraging local businesses to grow. The only way to do this is through direct Government/State assistance in upskilling and providing tax breaks to employment creation.

"Investment in infrastructure in towns like Mallow, Mitchelstown, Fermoy and Cobh, Youghal is all seriously lacking. Schools are underfunded, broadband infrastructure in places is scant. Facilities for young people are non-existent and the quality of people's lives can be enhanced if the Government woke up to the reality of people's lives in these areas."

Finally wrapping up the interview Sean spoke of his admiration for his father as well as the admiration from their constituents.

"The one thing that came across to me on the doorsteps was the great degree of esteem in which my Dad is held and on every second doorstep the departing remark from them was 'if you're half as good as your Dad you'll be doing well'. If I can take that on board and if I can keep my feet on the ground then things should be okay. I relish the challenge ahead."

You can check out Sean's blog here and his Flickr gallery here.