Over the next couple of weeks we will be hosting two public forums, one to be held this weekend entitled 'Universal Health Insurance' and the next on February 9th entitled 'Unite 4 our planet' which asks if an integrated approach can help tackle climate change (more on that later in this post).

This weekend's forum will be chaired by our Health Spokesperson Deputy Jan O'Sullivan in Dublin's Mansion House beginning at 10.30am and finishing up at 1.30pm.

The forum will be of particular relevance to anybody with an interest in or involved with the health services.

Despite additional spending and significant administrative change, the Irish health system remains in crisis. First proposed by the Labour Party in 2001, universal health insurance is increasingly being seen as the only way to achieve a better, more efficient and fairer health system.

The speakers on the day include Maev-Ann Wren, economist and author; Liam Doran, General Secretary of the Irish Nurses' Organisation and John Crown, Consultant Medical Oncologist. 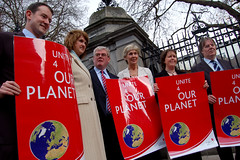 Unite 4 Our Planet will also take place in the Mansion House from 10.30am until 3.30pm on February 9th.

Labour's Spokesperson on Communications, Energy and Natural Resources, Deputy Liz McManus said: "Global warming cannot be compartmentalised into one or two neat departments at Government level. If we are to make meaningful cuts in our greenhouse has emissions, we need a whole-of-Government approach with joined up policies from the Department of Transport, Agriculture, Energy and the Environment."

Deputy McManus will be joined at the forum by Deputy Tommy Broughan, Deputy Sean Sherlock and Deputy Joanna Tuffy.