As elderly people from all over the country prepared to descend upon Dublin to protest this afternoon at the Government changes to the medical card in the Budget, the issue was once again raised by the Labour Leader Eamon Gilmore TD during Leaders' Questions in the Dáil.

Eamon said: "Is it or is it not the case that the Minister for Health will be able to change the income levels announced yesterday for medical cards without coming back to the House. Is the Govt going to index link the new income limits or not?

"The government has said that it plans to introduce an amendment to the Social Welfare Bill to repeal Section 1 of the Health (Miscellaneous Provisions) Act 2001. This will certainly end the entitlement of those who have yet to reach the age of 70, but my legal advice is that it will not allow the government to withdraw cards from those who already hold them.

"My legal advice is that the means that if people over 70 were given a medical card by virtue of Section 1 of the 2001 Act, the simple repeal of that section would not deprive them of the card they currently hold. 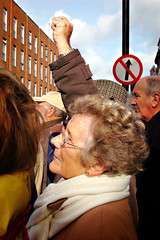 Protesting at the Dail

"Are government backbenchers really going to come in to the Dail and vote to take away medical cards from those who already hold them? They may now well be faced with this prospect. This is just another example of the extent to which the government failed to think this proposal through. It has been very evident since last Tuesday that the Taoiseach and his colleagues have been making it up as they go along."

You can watch Eamon's contribution in the video and read the full debate on the Oireachtas website.

Finally well done to all those who travelled to the Dáil to make their voice heard this afternoon. Pictures from today's demonstration will be available on our Flickr photostream. Were you at the protest? What do you think of the whole debacle? Let us know in the comment section below.