Dublin MEP Proinsias De Rossa has spent the last couple of days in Gaza as part of the European Parliament's delegation to the Palestianian Legislative Council. He has sent us a blog post of his visit which you can read below.

The flight landed two hours late - but the realities hit home immediately. When I tell the young woman at the passport check I'm going to Gaza she passes me to a security guard. Who checks my passport again. Asks again which flight I was on. Asks how long I'm staying and where I'm staying. All of which they've known for the past week - and all of which is on their computer.

I finally get through and meet Mike, an old friend. He'll be driving us as far as Gaza but won't be able to go in. His son has a West Bank pass ...

The mini bus taking us to stay overnight in Bethlehem stops off at the home of the owner in East Jerusalem. We meet his wife, daughter and two sons. They all speak English, French, Arabic and Hebrew. The daughter is a journalist and she's just had an article published in an American magazine on the development of Palestinian graffiti. She tells me that, during the Intifada, it was just Palestinians talking to themselves - now they are international and multilingual. And I even try my hand at translation: one of the daughter's photos shows the words 'saoirse' and 'ard mhacha', which I explain to her. And it turns out that her father has close connections with the College of Catering in Cathal Brugha Street.

Talking of graffiti, even dividing walls can provide an artistic impetus: this piece of 'wall art' caught my eye 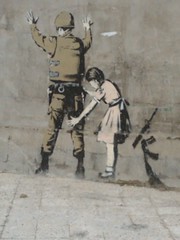 For a while it seemed that my plan to live-blog this trip would fall at the first hurdle: my Blackberry has been blocked. Apparently, this isn't too unusual: during a European Council security briefing held before the trip, we were told that Blackberries and PDAs are sometimes blocked by the Israelis .... or even infected with malignant software. Luckily, a fellow member of the delegation has lent me his mobile to phone back to Dublin ....

Dinner was quite surreal. We went to a small restaurant; there were around 12 Palestinians there and a TV in the corner turned to mute. The results of the Israeli elections came on and everyone continued eating. There was zero interest - and when we asked for the TV to be turned up we got looks of amazement. It's understandable - the Palestinians don't see a change of government in Israel bringing about a change in their own circumstances.

I still can't send e-mails from my Blackberry, so I've just been typing and saving. Had a good night's sleep in a ghost hotel on Bethlehem's main street - which is now cut off by the wall. After breakfast we headed off for Ramallah by bus. Stopped at Kalandia crossing into Jerusalem: a gap in the ubiquitous ugly wall full of angry graffiti On the 'Israeli' side the wall has been dressed with granite stone half way up, while the rest has cladding showing tourist scenes. Surreal.
Its cold and overcast. We're on our way to a briefing with the Palestinian negotiation unit. A young IDF girl with a machine gun on her hip comes on board to check our passports.

We had a technical briefing on facts on ground. Depressing. Not just human indignities. Even the President has to apply for a three-monthly permit to move around his territory.

We had a meeting with Prime Minister Salam Fayyad. He was very forthcoming, saying that the Palestinians' biggest enemy is disunity. Cairo is sponsoring dialogue meetings between 13 Palestinian groupings, in the hope that some accord can be reached before the Reconstruction Conference which is being sponsored by the European Commission and Egypt and is scheduled for March 2nd. The EU is seen as being soft: one of the points made to me was that this is the third time Israel has destroyed infrastructure in Gaza which EU taxpayers have funded - and now they're going to have to fund re-building once again. It's a good point!

'Dual use' is one of those terms one comes across in connection with various engineering products - could XYZ tube be used in a rocket launcher as well as in a boiler, for example. But I must admit I'd never heard the term 'dual use' applied to paper until now. Apparently paper is among the goods now blocked for entry into Gaza. The reason? Paper can be used in schools etc. - or it can be used to write propaganda.

As we cross into Gaza all seems normal at first glance. But dwellings destroyed a few years ago still stand in mute reproach to us far doing nothing far so long. The streets into Gaza are spotless. Lots of old bangers and donkey carts on the road. When we turn off the main street, we get our first glimpse of shelled buildings. Then on to the American International School, a business school which was completely destroyed. We meet the principle and a board member, and what they have to say is depressing. Apparently the school was previously targeted by Hamas. Now it's been destroyed by the Israelis. Seems neither Israel nor Hamas want Palestinian minds exposed to pluralist ideas. The Israeli Defence Forces have known the location of the school for the past ten years - this was no accident.

We're due to go on to the UNRWA and a Red Cross hospital, but I also have to find a landline at 10.30 (Irish time) to do a phone interview with Pat Kenny. I know the people in my Dublin office are fretting that I won't find a landline - but driving past all this destruction makes interviews seem a little irrelevant.

I did find a landline but the connection only lasted for a few minutes. I'm going to write more on our visit to UNRWA, but meanwhile here's a photo. 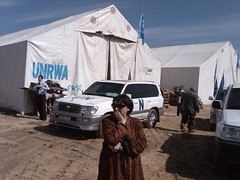 Now it seems the Blackberry is working again ... hope it lasts.

In a tent meeting the Palestinian Legislative Council. We didn't get to meet Dr Bahar: he left in a hurry before we arrived because they heard the drones overhead used to target Palestinian leaders. The drones herald attacks. We were in a tent because the PLC building had been hit by three 1 ton F 16 missiles. We saw pictures of a PLC minister who died together with his family, and we heard yet more heart-wrenching stories. A woman left her home with her children, carrying a white flag ... and a sniper targeted the children.

We were meeting out elected counterparts to discuss the need for Palestinian reconciliation: they need to be able to present a common front to both Israel and Europe.

The PLC members want the European Parliament to help protect the people. They want calm, they want crossings open and they want an end to the siege and occupation. It's clear that they are making a serious effort to form a national government.

It's been a long day. We finished with a meeting of non-Hamas groups, under the PLO umbrella. They all state that they favour a unity government, but refuse to detail what exactly divides them. Earlier, before we went to UNRWA, we met a dozen business men (all men) who were pleading for EU support to get Israel to let goods flow freely. It crossed my mind that the chambers of commerce in Ireland could help - made a note to contact them when I get back. They pointed out that Gaza was a trading port 4000 yrs. The more I see, the more Israel's scorched earth assault on Gaza is clear. Civilians - factories - UN stores - hospitals - clinics. Their declared target (Hamas) is virtually untouched, and certainly not cowed, despite the shock and awe tactics. Could it be true that the real objective was a few more seats for Livni? Lieberman is widely regarded as a fascist.
Everywhere we go we are asked whether the EU would do business with Israel if he is in Government?

We're staying in the Commodore hotel in Gaza. It's seen better days. They haven't served alcohol since Hamas took over, but a hunt turned up a bottle of whiskey. Very little for each of us, but it did help us relax and loosened our tongues.

Before I crawled into bed, got this trite mail from the Israeli embassy in Brussels. They have magnanimously allowed 25 thou flowers out of Gaza. I sent them a brief reply:

17 flowers for each grave in Gaza? And Sderot. Surely a child's life is worth more. Negotiate for god's sake. 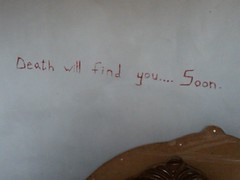 "Death will find you soon"

Up at dawn. Visiting the Samounni family. Farmers. Horror story.

Earlier, I discovered why my room was so draughty. Plastic sheet where glass should be. I looked out of the window to see a large shell hole on the beach behind the hotel. We are right at the port, and there are a few boats pulled up on the sand. It's clear why Israel would like this strip of land: with the calm Mediterranean lapping the beach, it's fertile and ripe for tourism.

But now it reminds me of the beach scene in Atonement.

And then comes the descent into Hell

We head out of city and stop 2km from border. Sandy soil, green except where it's been churned up by the IDF tanks. Reminds be of Rush in Co. Dublin, which grows soft fruit and flowers, but that's where the comparison ends. Rubble - formerly homes - dots the landscape. When we get close up to the houses still standing we can see shell holes in walls. One house still standing where a 35-year-old woman bled to death a few yards from her mother who also bled to death. Inside we see bullet marks from guns fired inside.

And we see IDF graffiti in almost every room.

Here's a sample: "Have you ever wondered what hell looks like? 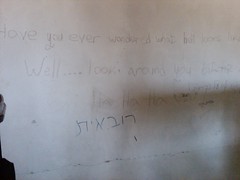 We go to a suburb of Gaza where a massacre took place. The extended Samounni family lost 47 members including eight women and eight children. This was not 'collateral' damage: it was targeted firing by snipers at white flags. Mr. Samounni lost his wife and four children. His home and those of his neighbours have been turned into a demolition site.