Speaking at the press conference Deputy Gilmore said the €2.8b budget package contained "detailed proposals setting out the crucial steps we believe must be taken in this budget if the economy is to be turned round" adding that the budget must be fair and support jobs. 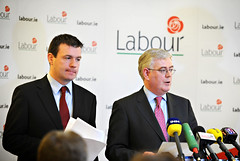 Deputy Burton said: "These adjustments must be achieved fairly. Those who have most and who earn most will have to pay most. Those on middle-incomes will have to shoulder some of the burden. Those on lower incomes and social welfare who are struggling to balance their household budgets must be protected insofar as possible. We need to boost demand, not pick the pockets of low-income families."

Some of the key proposals in our pre-Budget submission include:

There are many more detailed proposals available in our submission which you can download from the 'Our Ideas' section of the website as well as reading Eamon's full statement from our media centre. There are also photographs from the press conference on our Flickr photostream.