pictured at the RDS count on Sunday evening.

The final counts and recounts are being totted up and Labour's strong showing throughout the country has resulted in this Local Election being Labour's best ever.

Speaking after the election the Labour Leader Eamon Gilmore said: "One of the most encouraging aspects of the local elections for Labour has been the election of so many young, first-time candidates. We have now in place a new generation of young, articulate, capable candidates who will change the face of the Labour Party and change the face of Irish politics over the coming years."

As we post 130 councillors have been returned with some counts still ongoing; representing an increase of 50 per cent since 2004 in the number of councillors we have in local authorities throughout the country.

There were many particularly incredible results and in this post we will try to highlight some of these success stories as well as those that just missed out. 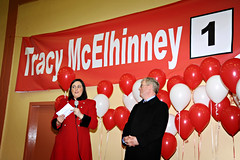 In Macroom Martin Coughlan took out Minister Batt O'Keeffe's son and in Balbriggan Ken Farrell had an impressive election topping the poll in his ward. In Finglas sitting councillor John Lyons who was previously coopted onto the council was returned a poll topper in his first election bringing in his running mate and first-time candidate John Redmond. John Gilroy in Cork's Blarney EA is the top Labour vote getter in the country and the second highest of all candidates in the country. 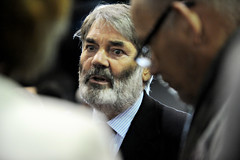 As we post there isn't much to report on European election counts as they are still taking place, but so far our sitting MEP for Dublin, Proinsias De Rossa, was declared elected at 5am this morning in the RDS after some delays down to rechecks. In Ireland North West Susan O'Keeffe was eliminated having doubled the share of Labour's vote in Ireland North West, well done Susan on a great campaign. We'll post on the other European counts (Ireland East with Nessa Childers and Ireland South with Senator Alan Kelly) as we get news.

There are also some other notable mentions where candidates where just pipped to the post for seats including first-time candidate Brian McDowell in Dublin City Council's Donaghmede ward, who lost out by 127 votes yet still managed to increase the Labour vote in the area to 34 per cent (up 10 per cent).

Other very close contests include our candidate in Limerick's Castleconnell ward, Elena Secas who lost by 73 votes, Liam Hogan in Cavan by 22 votes, Enda O'Rourke in Galway's Oranmore by 26 votes, while in Bandon (Cork County Council), Gearoid Buckley missed out by 105 votes. All candidates fought a hard campaign and commiserations to them for missing out so narrowly. 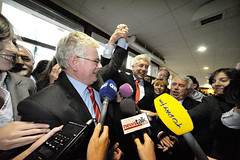 Eamon and Senator Alex White at the count

In the by-elections both Senator Alex White and Senator Ivana Bacik did Labour proud polling very well and while we are disappointed that they didn't take the Dublin South and Dublin Central seats, both candidates will be Dáil candidates again in the future.

If you want to find out more about any of our candidates you can do so on the website by using the following formula labour.ie/firstnamelastname. You can keep track of the last seats to be filled on RTE's election coverage and on Live Blog or Irish Election as well as following the count photographs that we have posted to our Flickr photostream.

Once again thanks to everyone who worked on the campaign, to all our candidates and to you for voting Labour.