To introduce you to our new MEPs, we will be profiling both Alan and Nessa and first up is Alan.

Alan is a native of Portroe in North Tipperary, a very rural area, but a Labour Party heartland. His election this year ended a 25 years period where there was no Labour MEP in the area.

Alan said: "I have to say that I am both equally astounded and honoured to be the Labour Party's MEP for Munster. To have come through what was a very close contest in a very strong field was a major success. It shows the growing strength of the party and hopefully we can build on that."

Alan describes his membership of Labour as "part of his DNA."

"There was an old slate quarry there and the Labour Party grew out of the old union that the workers formed," he explained. "It is a place I am deeply proud of and being part of a close, tight-knit rural community made a real impression on me and on my political outlook. 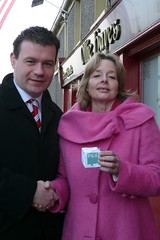 "Even as a seven-year old child I remember sitting on my father's knee being attracted to the party. At twelve years of age I used to stuff envelopes with letters for John Ryan TD in his office in Nenagh and when I was sixteen years of age I formed the Jim Kemmy Labour branch in University College Cork. Jim Kemmy was my political hero and was someone who was a family friend and it would be my hope to make a similar contribution to Irish politics."

Following his Leaving Cert in Nenagh CBS, Alan studied English and history in UCC while remaining active within the party. He then went on to do a Masters in politics before working briefly as a journalist in Cork and then working for Bord Failte/Failte Ireland. After completing a Masters in ecommerce in UCD Alan became the eBusiness manager for the tourism body.

"During all this time however I remained close with the party and worked as a party organiser in Cork and Dublin at different stages. It was here I gained a real appreciation of the decency of the membership of the party. It is what holds us together and makes us different. 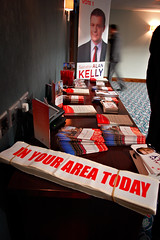 "It is these values of fairness and justice that I want to bring to our law-making from Europe. We have a very deep crisis in our economic affairs right now and we need to urgently find a new direction. Our public finances became far too dependent on the fortunes of the property market and we neglected to look after our exports and small businesses, so that we would be in a position to start creating jobs once again.

"The thought of a whole generation of young people and graduates not being able to find jobs and not realising their potential is a thought I can't stomach. We must do everything we can to make sure that our economy recovers as quickly as possible and long-term unemployment sets in. Our relationship with Europe will be part of that. 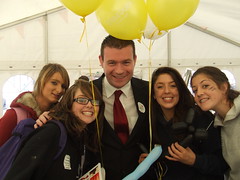 Alan at the Ploughing Championship

"We urgently need to re-focus our priorities. We have an immediate challenge in getting the Lisbon treaty passed. Our relationship with Europe is something that contributed to our economic success and we need to make every effort to secure the funding and finance we receive from Europe and to make sure a democratic Europe is strong in the world. As well as doing my best for the constituency, that is my most immediate priority."

Next time we will be profiling Nessa Childers MEP Ireland East and in the meantime you can see Alan's photographs on Flickr, his blog and not forgetting Alan's You Tube hit 'Vote Alan Kelly'.