Over the weekend the Labour Womens' National Conference gathered in the Oak Room of the Mansion House in Dublin, the official residence of the Lord Mayor of Dublin Cllr Emer Costello, who opened the conference.

In her welcoming speech the Councillor Costello said: "There have been 370 Lord Mayors in Dublin City, but of those only 7 have been women." In fact the fourth woman to hold the position Cllr Mary Freehill was also present at the conference.

The outgoing Labour Women Chairperson, Sinead Ni Chulachain, gave her report outlining the activities of the last two years on how Labour Women has devoted much of its time and energy to supporting and hosting training sessions for candidates. These various events held all over the country were an opportunity to give a local candidate exposure, but also for members to come along to hear about interesting topics.

During the day many motions were debated dealing with issues such as gender balance when running candidates, proposed by Cllr Maria Parodi (South East Inner City Dublin) as well as women's unemployment, older women, the cervical cancer vaccine, legislating for the x-case, domestic violence and migrant women.

A motion proposing prohibiting the purchase of sexual services was welcomed by the National Women's Council and the Immigrant Council who are both involved in the Dignity Programme aiming to combat trafficking for sex industry.

"We also have to tackle the mainstreaming of sexual services," said Cllr Rebecca Moynihan (Crumlin Kimmage Dublin). "I recently saw a television ad where a man was in need of directory enquiries, and 'stripper' flashed as an option. The idea that getting a stripper is like getting an electrician shows how mainstreamed sexual services are."

Cllr Veronica Cawley spoke on the low reporting of rape, "In Sligo women don't report rape because of the travel. Victims have to travel to Mullingar as there is no assessment locally. Another issue is getting a doctor to take on a rape case. In one case nine doctors were asked to tend to a victim, but all refused because they would not have had the time to go and sit in court when the case would be brought up." 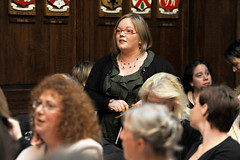 A motion calling for medical cards to women who lost their own pension due to the marriage bar was passed. "I lost 26 years because of the marriage bar. Now I am at an age when it's all affecting me", said a delegate from Meath.

A motion to call for the child benefit to be maintained at current levels was proposed by Cllr Ciara Conway (Dungarvan/Waterford). She spoke passionately about children. "Child benefit is one of the targeted ways to combat poverty", reiterated a delegate from Sligo.

The Party Leader Eamon Gilmore TD spoke about women's representation. He took questions and pledged to work to get more women into the Dáil. Both Kathleen Lynch TD and Lord Mayor Cllr Emer Costello voiced their support for quotas for women. 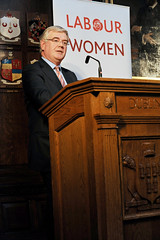 Deputy Kathleen Lynch's powerful contribution was warmly welcomed by the conference. Joan Burton TD, one of the best performers in the Dail, has been a staunched supported of Labour Women for years. "We cannot ignore the fact that gender matters, and it is a factor that gender is used against women", she said.

Labour Women will continue to prioritise their campaign to increase women's political representation. Guest speakers Labour Senator Ivana Bacik and Susan McKay, Director of NWCI, both spoke about the importance of having women in decision-making roles.

Senator Bacik said: "I will be reporting on the work of the Dail Sub-Committee in Women in Politics at the end of October. The Committee has found that in the 2007 General Election over 60% of constituencies had no women FF or FG candidates.

"Furthermore, 12 per cent of constituencies had no women candidates whatsoever. This illustrates where we are today. We are not only looking at stagnation but in fact going backwards in women's representation. 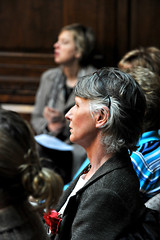 Susan O'Keeffe at the conference

"There are some good international examples such as Belgium or Spain, both of whom have increased the number of women in political decision-making. We also have to consider action measures.

"The Labour Party introduced its Electoral (Gender Parity) Bill earlier this year. This Bill would oblige all political parties to put forward women candidates or else they would face financial sanctions. Gender measures are not necessarily popular, but that is no reason why we cannot propose them and try to change the rules and structures of politic."

Susan McKay spoke about how women's absence has become invisible.

She said: "We don't even notice that women are not there, not making decisions. With the McCarthy report we are beginning to resemble Thatcher's Britain where 'there is no such thing as an entitlement'.

"When the protest against cuts was held and people were asked to front it, I asked about women's presence. 'Oh we already have a woman' a young man said cheerfully. Why shouldn't women lead? Community cuts affect especially women.

"To illustrate how decision-makers can be cut off from reality, a small example will tell volumes - women's groups were told that they could not claim for childcare, transport or tea... We have to be vigilant.

"We are now facing a threat to child benefit, violence against women continues, budget funding that was meant for Women for Equality Measure has been re-directed to Garda overtime funding. Women are being squeezed out.

"Indeed there are no limits women and children are being blamed for - most ills stem from women, it seems. The economic downturn has been blamed on black children and bankers in the USA have blamed single parents for the banking crisis."

"There is no going back to running the country without consultation with women."

You can check out more photographs from Saturday's conference on Flickr.