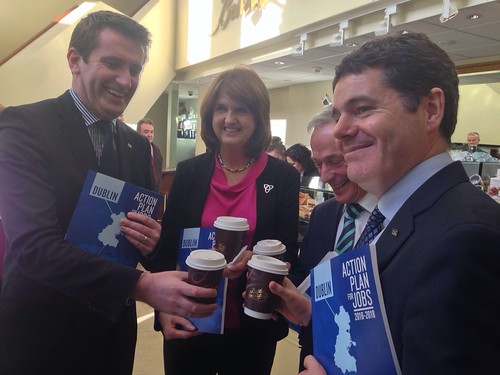 Convention in your Classroom

In this post Deputy Aodhan ÓRiordain talks about the Convention in your Classroom project he undertook to inform young people about the Constitutional Convention.

When I launched my ‘Convention in Your Classroom’ initiative last October it was my intention to meet with as many students as possible, in my constituency, to talk about the Constitutional Convention.

Over the last several months I spoke to 11 schools and held a mini convention in each of them.
The results varied from school to school but the one uniting theme was that in all schools there was almost universal support for Marriage Equality.

On November 10th the country will vote on the Children's Referendum and this week the corresponding legislation has been making its way through the House. A number of Labour TDs have made contributions to the debate and you can find links to the speeches below.

In her speech Minister Jan O'Sullivan pointed out that through this referendum, Ireland can at last reiterate its commitment to children, both legally and symbolically. "It is about enshrining in the Constitution a vision of children as citizens recognised as having an entitlement to inherent rights that must be vindicated. The principle that the voice of children should be heard is very important."

Senator Ivana Bacik got on her bike today to launch a new All-Party Oireachtas Cyclists Group. The group will encourage all parliamentarians to leave their cars at home and cycle to work.

In tandem with the Government's Smarter Travel policy which aims to have 10% of all commuting trips carried out by bike nationally in Ireland by 2020, the All-Party Oireachtas Cyclists Group hopes to encourage people to cycle, by tackling issues which may prevent nervous cyclists from making the journey.

Senator Bacik said, "The reason why many people do not cycle is because they are concerned about the experience of cycling in congested traffic and do not have the cycling skills to cycle safely in urban areas."

During his term as Deputy Lord Mayor of Dublin, Councillor Aodhan O'Riordain initiated a campaign to tackle educational disadvantage and eradicating illiteracy in the community, the Right to Read campaign.

Cllr O'Riordain, a primary school teacher, said: "Research shows that 30 per cent of children in deprived areas have basic reading problems. Many of these children live in overcrowded council accommodation, in an area without a library service and come from communities where access to formal education has been limited through the generations.

"Since I began teaching in the North Inner City in March 2000, it has become clear to me that the Council needs to take responsibility for this problem.