The Programme for Government delivering for Children - Conway

At this years Labour Conference, Deputy Ciara Conway is Chairing a workshop on how the programme for Government can deliver for children. Here she speaks ahead of the workshop.

My name is Lorraine O'Connor. I am a member of the Clondalkin Labour Party Branch in Dublin Mid West. This is my first time to attend National Conference. I am here with 7 other delegates from the Clondalkin Branch.

I am married with two teenage children; the youngest, aged 15, is blind and a pupil in a local mainstream secondary school and another, aged 18 who is nearing the end of his first year in college.

As Minister for Communications, Energy and Natural Resources, Pat Rabbitte has a wide brief that ranges from energy security to State assets, from postal services to oil and gas exploration, from broadcasting to broadband. Here is a short list of just some of the issues he has dealt with since coming to office.

Pat set up and chairs a high level taskforce on next generation broadband, comprising the CEOs of the main telecoms in the Irish market and senior departmental officials.

The taskforce has finished its work and Pat will now bring forward proposals to assist investment in broadband infrastructure and to accelerate delivery of bigger and faster broadband to more places as soon as possible.

My name is Robbie Stakelum and I am twenty years and old and a delegate at Conference from North Liberties, Limerick. I joined the Labour Party two years ago as I felt it reflected with my own ideological beliefs, not just the political but the social, moral and ethical values that have been at the core of the Labour movement.

This conference marks the centenary of the Labour Party, but tonight the delegates are focussed entirely on the future. We'll be debating around 160 motions, exploring how we can not only escape from the economic straitjacket that the last government forced on Ireland, but also continue our struggle to build a fairer and better republic.

Eamon Gilmore - "Politics in Ireland has been transformed."

The 66th Labour Party National Conference will take place this weekend in Galway on the 13th, 14th and 15th of April in the Bailey Allen Hall in Áras Na MacLéinn, NUI Galway.

Delegates from all over the country will making their way to Galway where more than 150 motions will be debated under the categories of jobs, reform and fairness.

The 65th Labour Party National Conference will take place in Galway on the 16th, 17th and 18th of April. Taking place in the Bailey Allen Hall in Áras Na MacLéinn, NUI Galway, (you can view a google map of how to get to NUI Galway from Eyre Square at the following link) the conference is expected to bring up to 1,500 people into the city over the weekend which will see almost 150 motions debated with particular emphasis on the economy, banking crisis and jobs.

One delegate catching up on the news on conference floor.

Over the last couple of years as part of our online coverage of conference different delegates have written about their conference experiences for us, this year is no different and here are our delegates' views from conference floor. 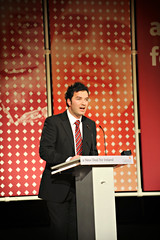 The speakers at tonight's debate on education were very critical of the education cuts in Budget 2009 and the more recent axing of 128 special classes for children with learning difficulties.

The end of the month will see our 64th National Conference in Mullingar on March 27th, 28th and 29th. We are expecting almost 1,000 delegates to this year's conference. We have a very full agenda for the conference with hundreds of motions and the focus will be on the economy, banking crisis and the 21st Century Commission report (the 21st Century Commission report contains proposals for the modernisation of the party's structure).

Over the weekend various delegates will post about the conference. We will update this post with their contributions over the whole weekend.

It's my second conference, and I'm more used to it now - but it's still a very intense experience. So far today I've been talking to people about so many different things (the Labour LGBT fringe event focussed on World AIDS Day, the Obama Campaign, what we're hearing on the streets, on the doorsteps) and listening to so many people talk about so many different things - both inside and outside formal session (motions).