One week to go

With a week to go canvassing is continuing throughout the country for a YES vote in the forthcoming Stability Treaty. Earlier today our Labour senators teamed up with other members of the Seanad to canvas on Dublin's Grafton Street and last night Minister Brendan Howlin along with Deputy Ciara Conway canvassed in Finglas with Deputy John Lyons.

This afternoon we have launched our Yes for Stability video which explains why we believe a YES vote is vital for the future finances of our country. We hope this video will make the YES vote arguments accessible on new media platforms for an online audience, young and old. Please do share it on your Facebook and Twitter accounts as well as your websites thanks.

Women for a YES vote

"Women work well together and recognise the value of cooperation. Ireland has been a strong member of the European Union and by pulling together, we can restore stability to the euro and to the community and continue the effort to create jobs and attract investment," Senator O'Keeffe said.

The event was held in the Mansion House and attended by women from all parties and from all sections of society.

Minister Alan Kelly and Henry Healy campaigning for a YES vote in Moneygall.

Henry Healy said: 'The only way forward for our country is to ratify the treaty. To ensure growth, jobs and prosperity for our future a Yes is the only way to secure it. It will be that simple; a Yes vote will continue our recovery and lead us back to a more stable nation within the EU'.

Wisdom and Youth for a Yes vote

This afternoon we had our Wisdom meets Youth for a Yes vote in the Stability Treaty launch with Fine Gael. Deputy Derek Nolan was one of those who took part and here he talks about why he is voting Yes.

It was great to do the joint Labour/Fine Gael event with both new and former Oireachtas members today. I think it was a good way to show the broad support within both parties for the Stability Treaty and the different generations of Irish citizens who will be affected by the vote.

From canvassing hundreds of doors in Galway over the last weeks, it is remarkable to see that peoples' everyday concerns are often not about themselves, but others. 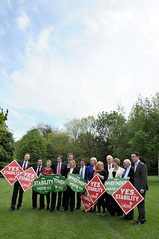 Wisdom and Youth for YES

Thumbs up for the Treaty in Tullamore

We had a very positive response and a most constructive days meetings in Tullamore on Friday along with MEP Nessa Childers and local Labour Party activists. It was a busy itinerary and involved media interviews with Midlands 103; Offaly Express and Tullamore Tribune.

Sinead Reilly and her colleagues doing a great job on the arts scene in Offaly and of course the flag ship project for the new community arts centre at Bury Quay is continuing apace. Still cannot get over the fantastic and innovative design and the super site location on the banks of the canal. All going well the new arts centre will go to construction early next year.

The Tánaiste on RTE's The Frontline Stability Treaty debate

Last night the Tánaiste Eamon Gilmore took part in RTE's The Frontline debate on the Stability Treaty. While the entire programme can be viewed from the RTE Player, we have a short clip which features the Tánaiste's opening statement which you can see in the accompanying video.

Once again Labour members and representatives were out in force knocking on doors in constituencies around the country. We been keeping our Flickr gallery of the campaign up-to-date and you can see the campaign in pictures on our Flickr account.

Then yesterday afternoon the Tánaiste Eamon Gilmore, Minister Joan Burton and Deputy John Lyons were in Dublin City Centre to launch our latest Yes poster and you can see the images from the launch at this link. We were also able to catch up with Minister Burton, who is the campaign Director of Elections, who gave us an update on how the campaign is going.

DCU Labour has made a great video on why you should vote Yes in the forthcoming referendum on the Stability Treaty, do check it out.

Canvassing for the Stability Treaty is continuing at apace with Labour members and reps knocking on doors all over the country to secure a Yes vote in the forthcoming vote. We spoke to a few of our TDs to find out how the canvas in their areas is going. Minister Joe Costello is going door to door every night and all weekend. He said: "The response on the doors has been very good and very positive, people are pleased to see us and like to be asked about how they vote. They have been very willing to engage in the arguments around the Stability Treaty. It has been a great and positive experience."