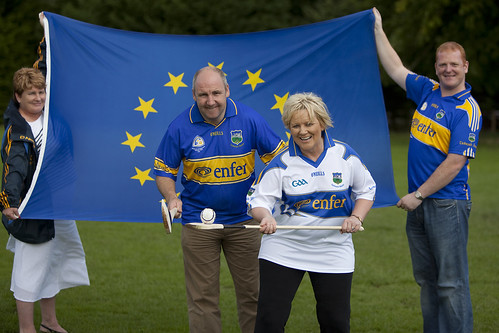 This afternoon we launched our Lisbon referendum campaign and have posted details of the event on our dedicated Labour for Europe blog.

The blog also has details on how to check if you are registered to vote and what to do if you find you are not.

The election of Nessa Childers, Labour's new MEP for the Ireland East (formerly Leinster) constituency was one of the stories of the 2009 European and Local elections.

Running an assiduous, grassroots election campaign from the Cooley Mountains in Louth to Rosslare in Wexford (and everywhere in between) Nessa secured almost 80,000 first preference votes to win Labour's first seat in the area for a quarter of a century.

Bringing with her an enormous commitment to public service and social justice which has become synonymous with the Childers family down the generations, Nessa says she is "hugely privileged to have received such a substantial mandate to represent the people of Ireland East in the European Parliament."

Arriving in Jerusalem on Monday, the team visited Gaza yesterday and during the week will meet with members of the Knesset, Government ministers, human rights' organisations and NGOs. The mission will finish on Friday and a report will be presented to the Foreign Affairs and European Affairs Committee.

Last night we were at the edges of our seat watching the drama unfold in the Ireland South count which returned Senator Alan Kelly as MEP with 64,152 votes while earlier in the evening in Punchestown Nessa Childers was deemed elected with 74,666 votes. Alan and Nessa managed to take the two seats in Ireland South and Ireland East, the first Labour seats in the two areas since 1979.

I would like to take this opportunity to send my warmest greetings to all European trade unionists on this International Workers' Day. For me, the 1st of May has always meant a celebration of all that is best about the workers' movement: solidarity, equality and cooperation. I remember very well May Days as a teenager in my home town, Esbjerg, in the 1950s, an age of strong trade unions, when the Danish welfare state was emerging. But that's also when I learnt about the harsh realities of unemployment and the impact it can have on ordinary families like my own when I was growing up.

Speaking to a packed-out Liberty Hall Eamon called on party members to redouble their efforts. "Labour's new standing now provides us with a platform for our most successive local government and European election campaigns ever. June 5th will be a crucial day for us, with local European and possibly two by-elections. Translating opinion poll support into votes on election day will require a redoubling of effort at every level from the parliamentary party down to the smallest branch in the country."

The attack on Gaza has underscored the need for Europe to help forge peace in the region, writes Proinsias De Rossa in the Irish Times today

You can read his opinion piece below.

"Have you ever wondered what hell looked like? Well . . . look around you bitch. Ha Ha Ha."

Those chilling words, written in a neat hand, were left by an Israeli soldier on the walls of a house in the countryside I visited during my trip to Gaza last week.

Dublin MEP Proinsias De Rossa has spent the last couple of days in Gaza as part of the European Parliament's delegation to the Palestianian Legislative Council. He has sent us a blog post of his visit which you can read below.

The flight landed two hours late - but the realities hit home immediately. When I tell the young woman at the passport check I'm going to Gaza she passes me to a security guard. Who checks my passport again. Asks again which flight I was on. Asks how long I'm staying and where I'm staying. All of which they've known for the past week - and all of which is on their computer.

Every citizen's vote will count in June's European elections

For the past five years, the conservatives have had a majority in Europe - in most EU Member States and in the EU institutions. What have they done with it?

Conservatives have had a blind faith in the market - serving the interests of the few rather than all Europeans. We are now seeing the damage that badly regulated markets can do.

In this June's European elections, every citizen's vote will count. We face a clear choice between a progressive Europe and a conservative Europe.

To introduce the wide-ranging progressive reforms that put people first and are essential to secure the future well-being of European citizens, we need a strong progressive majority in the European Parliament and only the PES (Party of European Socialists) can deliver that.