No doubt over the Easter break tens of thousands of hillwalkers will take the opportunity to enjoy the beautiful Irish countryside.

All land in Ireland is owned by private individuals, groups of people in commonage or by the State such as Coillte, the ESB or National Parks.

There isn't any clear status as to what land is accessible or what the rights of way are from the public road to the uplands where most recreational walkers want to go. As a result there have been a number of stand-off confrontations and disputes between walkers and landowners.

Today we have launched an innovative, creative and constructive legal framework to provide certainty and security for both landowners and recreational walkers. And in Government we will implement this.

On the road with Pat

My day started with a walkabout Carlow town with our two candidates, Cllr Michael O'Brien and Cllr Jim Townsend. When speaking to those I met, I heard story after story about their struggle with getting a bed in hospitals for themselves or for members of their families. It is a story that I hear on all visits - the wait on trolleys, endless queues and cancelled appointments. 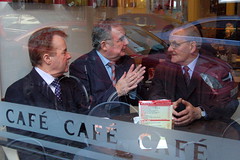 Stopping for a quick cuppa

We launched our nationwide health survey today which produced some dreadful but not surprising results.

As many as 22 per cent of public patients are still waiting after a year.

Labour has tabled a motion in the Dail calling on the Government to honour it's commitments to reduce class sizes for the under9s to under 20:1

As concerned parents all over the country pack out meetings on class sizes organised by the INTO in their 'Is your child being crowded out' campaign the Labour Party has tabled a motion on the issue to be discussed this evening and tomorrow night in the Dail (March 20/21st).

This is the second such motion to go before the Dail, the first was rejected by the Government.

Reform and Investment in the Health Service

Earlier today, we joined with Fine Gael to outline what we would do in the area of healthcare when in government.

This joint policy document tackles head-on the main causes for concern that people have when they and their families are ill. Through more beds, prioritising the patient and better investment of money to where it really is needed, we believe that we can build the health service that the people of Ireland deserve. more

To help us develop some further practical solutions that we will implement in government, we are asking you to take a few minutes to give us your views on the health service. Click here to take survey

This week marks the annual BT Young Scientist and Technology exhibition in the RDS, Dublin. Pat Rabbitte and Ruairi Quinn stopped by yesterday to chat with some of the 1,800+ competitors from the schools in 29 counties taking part in the competition. The event runs until Saturday afternoon.

The mix of projects, not to mention the research and presentation of the student's ideas was very impressive indeed. Pat and Ruairi learned about the effects of food on sleeping patterns, subliminal messages (could come in handy - vote Labour), a battle of the sexes fish style, among other interesting topics.

Labour has a a plan to tackle traffic congestion in Dublin. By doubling the bus fleet and introducing a €1 standard charge, we can help end the daily misery of commuters as they struggle to get to work and home to see their families.

Traffic congestion in Dublin has reached a point where it is commonplace to spend three hours a day travelling on a bus getting to and from work, motorists have even spent seven hours trying to get home from the M50.