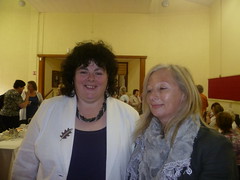 'You are women of influence. Use that influence to talk about mental wellbeing, about de-stigmatising mental health illness, saying it is alright to talk', urged SOS.
The ICA covers the entire country and can touch thousands of people. With their message of talking about mental health they can make a difference in communities.

Over 500 people in Ireland take their lives every year. An increase of 4% was recorded last year. Looking after one's mental health is a suicide prevention measure.
The Government has ring fenced €35 for mental health.