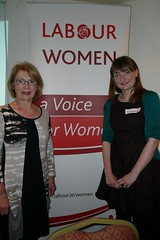 'I started in politics as a regular member, motivated by issues I was interested in. I have always been a passionate believer in the importance of having women in politics. I welcome the legislation which will see political parties run more women', she said. She spoke about her work in Government and reiterated Labour's commitment to the principle of fairness and equality.

Cllr Orla McLoughlin spoke about the life of a Councillor and about the importance of women getting involved in politics.
'Women get involved in community activism, and really the leap into politics is quite logical. But women hesitate to get into politics, and often prefer to focus on improving their local community as their priority. I hope more women will consider entering politics. Women want to solve problems, and that is what we need now.'

The discussion on Women in Politics, Budget 2013 and the Children's Referendum produced ideas and campaign plans. 'Suggestions for politicians to job share and to be able to have a maternity leave would give women better work-life balance', said Sinead Ahern Labour Women Chair outlining some of the ideas put forward. 'The social impact of cuts will hit us harder in the future unless we actively intervene early to help families. Big problems cost more than small problems', she further said.

Labour Women Regional meeting discussed various ideas such as ways to save public money by tackling the rents paid by state bodies, developing Limerick Port and creating a tax band for high earners.