LW at the Party Conference 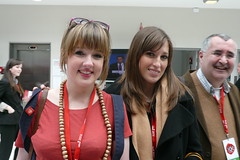 The Party Conference was again a great day.
'This was my first Party Conference, I really enjoyed it', said a delegate from Athlone. The number of young women has increased and the confidence levels of women as well. It is difficult to believe that there was a time when women did not attend the Conference in great numbers.
Labour Women Lunch is an annual event now, bringing together all the women for one hour to meet new people and catch up with old friends. Minister Joan Burton sat down for her cup of tea, no doubt at the same time thinking about her time on the stage later in the day as she was to give out the Long Service Awards. On Friday she had addressed the Conference kicking off the Conference.
Labour Women had their usual stand displaying material. Raffle tickets were selling well, and people stopped to chat and pick up information about Labour Women. Turn Off the Red Light campaign were also involved with a stand, and noticed that many Labour Party members are already aware of the campaign supporting it.
Labour Women Workshop was cancelled as were all the afternoon workshops due to the violence of the ultra-left groups outside the Conference Centre. It is very disappointing to see that democracy itself is under threat from the far-left who disrupt most political events currently. The Workshop was to discuss the forthcoming Electoral Bill which will aim to increase the number of women candidates. 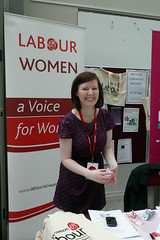 Congratulations to all the women elected to the Executive Board, Standing Orders Committee and as the National Treasurer!