Why Women Should Vote YES with LW, Minister Joan Burton and Labour's MEPs 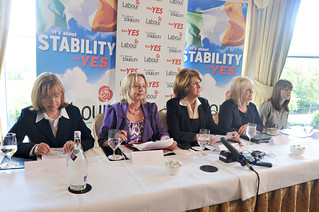 The 5 reasons for women to vote YES are the very same reasons the Labour Party has been talking about during this campaign. Strong euro, Good housekeeping, Investment and Trade, Safety net and Growth. All are good for women. All are good for Ireland. Each of this reasons are relevant to women's lives in very direct ways : we depend on the euro and a strong economy, we have to have a funding line for our social protection and salaries, we have to run the country prudently to ensure our children have a safer future, and we have to support the growth agenda to get the economy growing again.

Joan Burton opened by reminding us that for women a YES vote is the safest option.
'We need to be sure that the government will continue to have the money to pay for a humane social welfare system, because unemployment is not going to disappear overnight despite the many good jobs announcements in recent months. The last thing we need is to do something that would jeopardise existing jobs or discourage investors from creating the sort of new jobs we’re hearing about every week. Why do we have this Treaty? Well, because late last year the euro currency – the currency in which the Department of Social Protection pays pensions, jobseekers allowance, disability allowances – was in real trouble. It was genuinely close to collapse and European governments had to respond' she said.

Katherine Dunne, Labour Women Chair, made a connection with the 5 points and women's lives. 'We all depend on this treaty to be passed to have a more secure future', she said.

'People who are already at risk of poverty are the ones who become more vulnerable during an economic recession. Most of these are women, especially single mothers, women carers, and women with few qualifications. The longer the crisis continues, the greater the risk that it will delay advances in achieving real equality between women and men or even reverse progress that has been made already, with negative longer-term consequences for social protection and social inclusion' said Emer Costello MEP.

'I think it is important to be real with people regarding this referendum. Voting Yes will not in the short term lead to a reduction in the number of women unemployed, and it will not, in itself, lead to significantly greater investment. For this, as it has been said, we need a specific jobs and growth pact, something I have been working for and fighting for since I became a member of the European Parliament last year' said Phil Prendergast MEP. 'you hope that you will never need to claim under your car, home or medical insurance, but that doesn’t mean you toss the policy out the window and live of a wing and a prayer. The purpose of insurance is to protect you and your family from devastation, and the same can be said of the ESM.'

'Our future depends on a stable economy, and growth of our economy. Women’s futures and the futures of our children, families and businesses depend on this growth. To achieve this growth we need long term thinking to get us out of trouble. In this we must also stand firm in support of French President Francois Holland and assist him in every way possible to achieve his objective to start a Europe wide growth strategy. We need a massive new deal for Europe, a EU investment plan to boost economic growth and create jobs, and help countries like Ireland out of the crisis', Nessa Childers MEP said.

Read The Irish Times 'Burton:Treaty a cushion for Ireland'