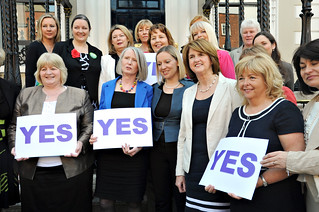 Minister Joan Burton, Minister Lucinda Creighton, Senator Mary White and Senator Jillian van Turnhout all spoke in support of the YES vote. Women from different parties and none coming together to support the YES vote illustrates the importance of the YES vote. We know we must pass this referendum in order to create the conditions to tackle the very shaky situation within the euro zone. Our euro, the one we spend to buy food and pay our bills.

Senator Susan O'Keeffe had convened this gathering, and introduced the speakers to the packed room. She noted the value of collaboration and co-operation and urged that Ireland would continue to do both in Europe to restore stability to the euro and to bring investment and growth to Ireland and the EU. 'I am urging everyone - especially women - to come out on May 31st and vote yes. The collaboration that is at the heart of Europe remains important.'

Minister Joan Burton, who is the Labour Director of Elections for the Referendum Campaign, said : 'My message to you here today is to Vote Yes in the Stability Treaty Referendum on 31st May. For stability in the Irish economy and will enhance a stable euro, for increased investor confidence, for access to funding should we need it, for good housekeeping and for a more certain future.'

The event was attended by women from across the political parties and the independents and by women from a variety of civil society groups and from business. Labour Women were represented by members of the Parliamentary Party and Labour Women members from all walks of life.