LW Chair speaks at the Turn Off the Red Light launch

Labour Women joined the Turn Off the Red Light (TORL) today 24th Aug for the launch of the TORL submission on prostitution laws. 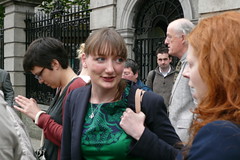 Sinead Ahern, LW Chair, at the TORL submission launch where 55 organisations were represented

Minister Shatter opened a public consultation in exploring how best respond to the changing nature of prostitution in Ireland. Prostitution has moved indoors, over 90% of women in prostitution are non-Irish, mobile phones and the internet have changed the way the sex trade operates and human trafficking has become a serious issue connected to prostitution.

Sinead Ahern, Chair of Labour Women, spoke at the launch :

Labour women, along with the thousands of members of the wider Labour party have long acknowleged that human trafficking for the sex trade and the hurt and human suffering that results from it are a reality in Ireland . In 2006 Labour Women produced a detailed policy on violence against women which recommended investigating how the Swedish model of criminalizing the purchase of sex could be adopted here in Ireland. In 2010 at Labour Party conference voted to support the Turn of the red Light campaign. Over the last number of years many of our elected representatives including Cllr Rebecca Moynihan on Dublin City Council and Emer Costello MEP for Dublin have sought to bring in measures to support women affected by trafficking.

Labour women acknowledges that addressing the potential harms of prostitution , and in particular forced prostitution is a complex undertaking. Simply criminalizing the purchase of sex will not address the myriad of issues faced by women involved in prostitution from addiction to poverty to the wider place of women in society however we believe that campaigns like TORL are taking the first very important steps. We also wish to commend the work done by agencies such as Sonas, Ruhama and others offering practical support for women.